Puerto Rico finds itself at a critical juncture in its history. The island has an unprecedented opportunity to transform its electric system by integrating more diverse and renewable generation sources and creating a competitive and resilient energy portfolio. Creating an energy matrix of this type, however, requires empowering ratepayers and stakeholders. Maintaining transparency is vital. It’s this transparency that is currently at risk as new laws that restrain the independence of the Puerto Rico Energy Commission (PREC) are considered.

In January 2016, the first PREPA rate case, ordered by PREC – an independent regulatory body, was made public. The order required PREPA to share financial records that showed a detailed breakdown of the utility’s revenue requirement. 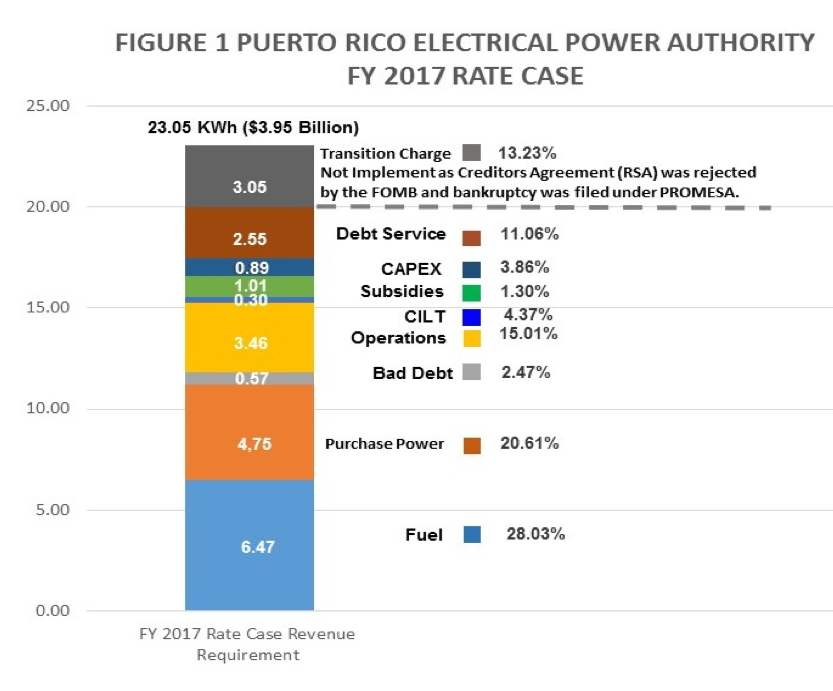 As shown in Figure 1, for Fiscal Year 2017 the revenue of PREPA was estimated to be $3.95 Billion, equivalent to an average all-in rate of 23 cents/kWh. As the Transition Charge was not implemented and PREPA filed bankruptcy under Title III of PROMESA, the $500 million per year related to this charge – equivalent to 3.05 cents/kWh in the monthly electricity bill – was not charged to consumers.

The future of the Puerto Rico Energy Commission and transparency in the electricity sector is at risk.

From the remaining $3.45 Billion, $1.1 Billion (6.47 cents/kWh) were allocated for the purchase of fuel that PREPA uses to generate energy with its own units, and $819 Million (4.75 cents/kWh) were allocated for PREPA to purchase energy to supply its full demand. Currently PREPA base load averages approximately 2,000 MW, and nearly 1,000 MW of this base load is supplied via power purchase agreements with EcoElectrica and AES. PREPA peak load is close to 3,000 MW. This peak occurs during weekday evenings. The additional capacity is currently supplied by PREPA’s own generation.

The revenue requirement refers to the income that the utility needs annually for its operation, and gives a de facto breakdown of the electricity bill. It is a key piece of information for both ratepayers and prospective investors.

PREPA’s expenses and rate structure – which for years remained a well-kept secret – was exposed by the Commission during the FY 2017 Rate Case proceeding.

That rate case was part of an important transition towards transparency in our electrical system. However, the future of the PR Energy Commission and transparency in the electricity sector is at risk. Proposed laws to restructure the Commission would impede this independence and endanger the transparency which is so vital to ensuring a level playing field for investors – and for growing the economy.

It would be regrettable if, after the progress Puerto Rico has made towards a well-designed regulatory framework, the source of valuable public information and transparency could be weakened or dissolved. It is at this historic moment that Puerto Rico, more than ever, needs to make and keep that commitment to transparency.