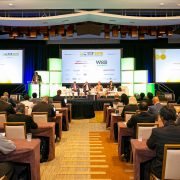 2019 marked another blockbuster year for the Caribbean Renewable Energy Forum, which drew more than 500 attendees from 50 countries to the JW Marriott Marquis in Miami, Florida on October 16-18, 2019. Highlights included the Island Resiliency Action Challenge, the E-Mobility Workshop, the CREF Industry Awards, the Women in Energy Breakfast, the Ministerial Roundtable, the two cocktail receptions, numerous stakeholder meetings, new “Game-Changer” lightning talks and the Sunrise Fun Run. Thank you again to everyone who came – our attendees old and new, our speakers, our sponsors and our partners. 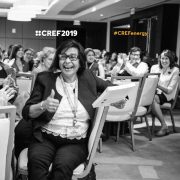 The market turned out in record numbers for CREF 2018 and what was, by a margin, the largest energy event in the region last year. What was new? We launched, with Advanced Energy Group, the Island Resiliency Action Challenge. Then we launched, with Clean Horizon, an interactive database of energy storage projects across the region. We brought new international talent to the agenda and shone a light on regional success stories. The event “buzzed” for three days. And by the numbers? CREF gathered 500 delegates, 120 speakers, governments and utilities from over 20 Caribbean jurisdictions attended and over 50 sponsors and exhibitors. Join us, join the Caribbean energy market at CREF 2019. 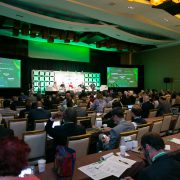 550 delegates from 50 countries participated in CREF 2017. 100 speakers across multiple tracks, case-studies and workshops contributed their expertise and experience. Governments and utilities from over 20 Caribbean jurisdictions attended. Over 50 sponsors, exhibitors and partners joined the roster of CREF supporters in 2017. 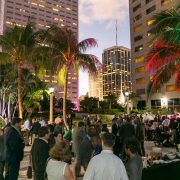 Featuring over 500 attendees from 50 countries, CREF 2016 was the largest annual gathering of the Caribbean energy market.  It took place at the InterContinental Miami from October 17th-19th.  More than 20 Caribbean countries were represented either by their government or by their utility, or in many instances, by both.

From utility scale to distributed generation, storage to smart grids, financing to regulation, energy efficiency to the role of gas as a complement to renewables, CREF 2016 was the primary meeting place for regional and international market participants. 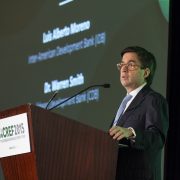 Joining us at CREF 2015 for what was a record-breaking event were close to 500 delegates from 41 countries. 21 Caribbean countries were represented at CREF either by their government or by their utility, or in many instances, by both. Building on those foundations, we look forward to working with the market over the course of the year, and at CREF 2016, to channel investment into the creation of a resilient energy matrix for the Caribbean. 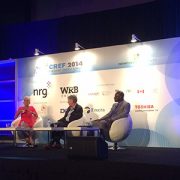 Featuring 450 delegates from 41 countries, CREF 2014 was a sell-out event due to unprecedented demand. The conference featured delegates from 21 Caribbean countries were represented either by their government, or by their utility – or by both. Our thanks to our speakers, sponsors and delegates for contributing to what was, by any measure, an exceptional event.

Over 70 speakers populated a world-class agenda.

CREF 2013 featured 440 delegates from over 40 countries for three days of superb sessions, networking, discussion and debate. We would like to extend our particular thanks at this time to the Government of Aruba, our 2013 Co-Host, for their commitment to ensuring a world-class event for the region.

We were honored to have the opportunity to work alongside senior Aruban stakeholders on Green Aruba IV which took place the day preceding CREF 2013. Our congratulations to Aruba on a superb event which, amongst many outcomes, highlighted the significant progress made towards diversifying the island’s energy matrix in recent years.

Underpinning CREF 2013 was a world-class agenda featuring 75 speakers. Brought together in dynamic and interactive panel discussions, our speakers grappled with the obstacles to, and explored the opportunities for, renewables development across the Caribbean. For 2013 we also introduced “Island Roadshows” designed to provide developers with clear insight into opportunities for engagement and investment across a series of regional markets. CREF 2013 featured Roadshows from nine regional governments including Puerto Rico, the Dominican Republic, Trinidad and Tobago, and Jamaica.

The organizers of CREF would like to thank our speakers, sponsors and delegates for a record-breaking event in Aruba.

400 delegates from 40 countries participated in CREF 2012. The conference continues to grow rapidly, as does the opportunitiy for renewables development in the Caribbean. We would like to extend our thanks to a superb cast of speakers and a world-class roster of sponsors. Our thanks, too, to our co-hosts, the Government of Puerto Rico.

Over 360 delegates from 39 countries participated in CREF 2011. It was by far our biggest conference to date, emphasizing the growing significance of renewables to the Caribbean, and the role that CREF has come to play in facilitating vital dialogue between stakeholders. CREF is about more than just dialogue and this year’s conference saw deals signed and new policy initiatives announced.

We would like to extend our thanks to our speakers, sponsors and delegates all of whom were instrumental in the overwhelming success of CREF 2011. 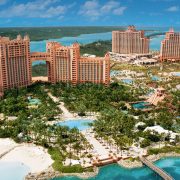 315 Participants, 37 Countries, 11 Government Ministers, 60 Speakers, the majority of the region’s utilities, leading developers from around the world,  all the key development institutions, ink on several projects, countless meetings and introductions … CREF was an outstanding success. Thank you to all our speakers, sponsors, and delegates.